Alien Species
Register
Don't have an account?
Sign In
Advertisement
in: All Tomorrows Universe, 2008 Debuts, Sapient Beings,
and 4 more 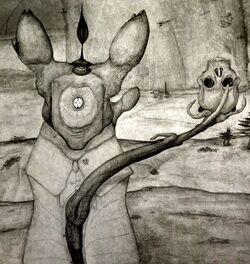 C. M. Kosemen
The Author is an alien researcher who studied the history of Humans and their descendants and authored a book on the subject, All Tomorrows.

At the end of the book, there is a picture of the author holding a billion year old Human skull in a tentacle-like appendage attached to the middle of his body.

The author does not know how humanity went extinct, but in his opinion, it's the trip that matters, anyway. He would also encourage the readers to Love Today, and seize All Tomorrows.

The Author belongs to a non-humanoid species with a bilaterally symmetrical, hairless body and an erect posture. Comparing him to the Human skull that he is holding, it can be deduced that the Author is relatively short, around 90 cm or 3 ft tall.

In spite of his size, the Author's head is relatively large, possessing two large lobes and an eye-like organ with two pupils. He appears to wear clothing in the form of a long shirt with a pronounced collar, concealing whatever legs and lower body he may have; although one long arm emerges from the axis of his body. The arm seems to be jointless, equipped with at least three fingers and one distant thumb.

Although nothing is known about what kind of environment the Author dwells in, from the image it can be shown that it at least contains tree-like organisms.