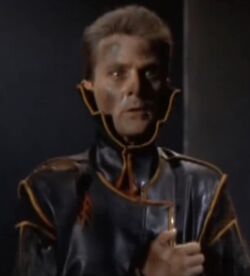 A Human taken over by a parasitic Auran.

Planet of the Vampires

The Aurans are a parasitic alien race from the planet Aura, and exists on a different "vibratory plane" that makes them ordinarily invisible, and allows them to exert telepathic influence over living humanoids and take over the bodies of the dead or those who intentionally allow them to.

The Aurans claim that they don't need to behave parasitically: as long as their host cooperates and allows them, they may act symbiotically instead. However, despite using that word, it is clear that the method requires the host to completely submit to the Auran and willingly become a mere spectator within its own body, which is controlled by the Auran. They are not capable of forcing themselves upon an unwilling living host.

Since the Aurans can also inhabit dead bodies (at least recently deceased ones), they may simply use their telepathic influence over humanoids and turn them murderously homicidal, thus providing dead bodies for the parasites in the form of victims. It's not known if they're incapably of willing someone into suicide, or simply find homicide easier, as a single mind-controlled subject can provide numerous victims rather than just one. In any case, it remains possibly for a determined subject to resist the Auran's influence.

Due to the biological limitations of existing in a different plane, the Aurans claim that they cannot build spaceships or any other kind of technology on their own. When their sun was about to die, they became desperate to find a way to escape their doomed homeworld, and started sending out distress signals to lure spaceships into approaching their planet, at which point they used their telepathic abilities to make the crewmembers violently murder each other, so that the Aurans could take over their dead bodies and inhabit them, taking hold of the spaceship to leave.

Retrieved from "https://aliens.fandom.com/wiki/Auran?oldid=189856"
Community content is available under CC-BY-SA unless otherwise noted.