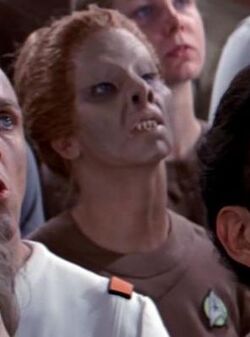 Star Trek
The Aulacri are a sapient humanoid species. At least one member of this race was known to serve in Stafleet in the late 23rd century, suggesting that they could be Federation members.

They have been described as diminutive, but strong and agile creatures with a very acute sense of hearing and a long, prehensile tail.

Retrieved from "https://aliens.fandom.com/wiki/Aulacri?oldid=125779"
Community content is available under CC-BY-SA unless otherwise noted.