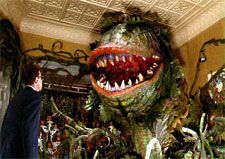 Varies upon how much food is consumed

Native language of the planet they invade

The Little Shop of Horrors

Marty Robinson
"Audrey II" is the Earthen nickname given to a species of mobile, carnivorous, sapient flora. While still sprouts, they already have the natural, perhaps instinctual intellect to trick other sapient species into feeding them to adulthood. As they mature, their pod becomes impervious to conventional attacks, although their vines are still susceptible, albeit difficult to hit. They are capable of hypnotizing potential prey items into feeding themselves to the flora. Once one of them grows large enough off an ample supply of blood, it will sprout flower buds in order to spread the infestation further.

This species appears to have some method, perhaps biological, of space travel, as well as the capability to completely overrun planets. Presumably afterwards it uses the planet as a launch pad. They have attempted invasion of the Earth at least once.