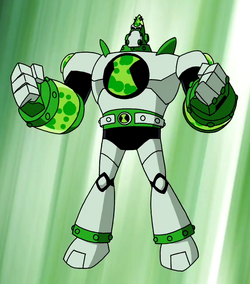 Ben 10
Atomix's Species are an unnamed race of biomechanical humanoids from an unknown planet in the Milky Way Galaxy.

Members of this species are robotic in appearance and have large cylinders in their arms that are full of a nuclear liquid substance filled with bubble-like spheres. They do not have mouths.[1]

This species can create and manipulate atomic/nuclear energy using their hands, fundamentally making them walking nuclear reactors. This is accomplished by them chanting "HAA-MEE-NA HAA-MEE-NA HAA-MEE-NA-HA!". While it is not crucial for them to chant during every attack, doing so will focus the attack's power, thereby allowing it to cause more damage.[1]

This species can activate the cylinders on their arms and chest to melt nearby objects, including an Evolved Arachnichimp's webbing.

This species is capable of flight, during which they can perform a flying ramming attack dubbed "Fissile Whistle".

This species is extremely strong, being able to take out an Evolved Vaxasaurian with a single punch, kick objects into a planet's atmosphere, and hold their own against a Kryptonian.[1]

This species has hard bodies, giving them substantial protection against physical attacks. They can also produce nuclear energy shields for extra defense.

This species can generate a blinding orb of nuclear energy dubbed "Fusion Cuisine", which can greatly harm Vladats and burn up Ectonurites and Corrupturas to the point of destroying them. With enough work, they can even generate a Fusion Cuisine the size of a sun.[2]

This species can generate a minute Red Sun by manipulating their nuclear energy to mimic a natural Red Sun's radiation.[1]

Similar to bipedal Lepidopterrans, this species can glow in the dark.[1]

Because they do not have mouths, this species is immune to the ventriloquism abilities of Ventrilosquid's Species.[1]

Unlike Metahumans such as Firestorm, this species cannot trans-mutate matter. They are also unable to shift their radiation to match that of Kryptonite.[1]

Retrieved from "https://aliens.fandom.com/wiki/Atomix%27s_Species?oldid=195981"
Community content is available under CC-BY-SA unless otherwise noted.