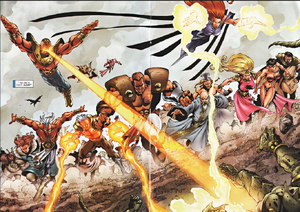 The Atlanteans are physically no different than humans. However all Atlanteans possess superhuman physical and mental abilities. They are capable of harnessing the universal energies to manipulate their bodies and minds, granting them a wide variety of powers depending on their chosen discipline.

The Atlanteans predated humanity’s evolution by at least over 400,000 years.

Nearly 110,000 years ago the Atlanteans were visited by an extraterrestrial vessel. In wonder many citizens of Atlantis came out of their homes and rooftops to greet the visitors. However the aliens proved to be hostile when the vessel began abducting its people. The Warrior King of that era, Aristophanes led his armies to attack the vessel and reclaim its people.

The battle against the aliens would fade into legend. however some technology captured from the alien shipped provided a basis for the Atlanteans to advance their technology considerably.

Ten thousand years later Atlantean civilization became to dominant culture in Earth. By then a secondary evolutionary species began to emerge: Humanity. Due to the fantastic powers that the people of Atlantis possessed they were viewed upon as gods.

At the same time a philosophical schism was born amongst the Atlanteans. Majority of the Atlanteans, impatient with natural evolution decided to undergo a new radical change that would advance them to a higher plane of existence. It was known as Transition, a method in which the Atlanteans would pool their combined psychic might to ascend to another state of being. However it’s concept was not accepted by all of its people. About a a thousand or so declined to enter Transition in favor of guiding the emerging human race.

While those that decided to undergo Transition, the remaining Atlanteans went to stasis as a precaution against the potential devastating effects of the ascension. However the Transition proceeded as plan, in order for the process to go as plan it was required that the Atlanteans to purge their emotions. With the exception of one member who refused at the end, the transformation was a success, but the blacklash wave from that individual's emotions during the change, resulted in a near catastrophic event that sank the city of Atlantis into the sea.

Ages ago Atlanteans relied on their martial abilities in a time when savage beasts and tribes roamed the Earth. However over time they progressed into a society of intellectuals and scholars due to millennia of peace.

Atlanteans express themselves and hone their gifts by specializing in one of the Five disciplines of Atlantean society:

Retrieved from "https://aliens.fandom.com/wiki/Atlantean_(Crux)?oldid=173763"
Community content is available under CC-BY-SA unless otherwise noted.