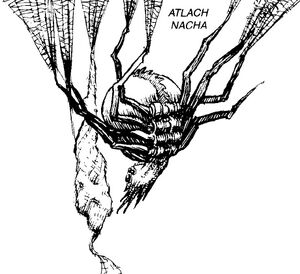 Atlach-Nacha is a monstrous spider-like deity, described by Tsathoggua as one of the "Old Ones". His underground lair can be accessed by subterranean tunnels from within the Mount Voormithadreth (the lair of the Voormis), in the Eiglophian Mountains of the old continent of Hyperborea. There, the spider-god weaves his eternal webs over a bottomless gulf.

He is described as being "big as a crouching man but with long spider-like members", and is capable of running with great swiftness. His face is surprisingly expressive for an arachnid-like creature, and includes "small, crafty eyes that [are] circled about with hair". His voice is described as thin, shrill and "piercing as a sting".

Retrieved from "https://aliens.fandom.com/wiki/Atlach-Nacha?oldid=174228"
Community content is available under CC-BY-SA unless otherwise noted.