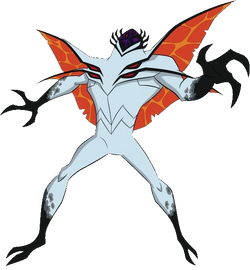 Ben 10
The Atasians (commonly known as the Highbreed) are a race from the planet Augstaka[1] who believed that their DNA was the purest of all living species and sought to cleanse the galaxy of lower life forms.

Atasians were originally a white humanoid plant-like species with black hands and feet, a purple face with three or four red eyes whose placement would differ between individuals, and four red eye-like features on their chests.

After the genetic repair, Atasians now come in many colors.

Atasians possesses great physical strength and endurance, allowing them take on opponents twice their size. Technically speaking, an Atasian's physical strength ranges from being a little bit weaker than Vilgax to substantially stronger.[2]

Atasians can shoot their fingertips like darts and quickly regenerate them. They also sport wings they can use for flight.

Atasians can draw water from the ground using their tendrils from their abdominal area in the most arid areas.

The Highbreed are extremely thermophobic and cannot work in conditions that have high temperatures, but are oddly capable of walking through fire unharmed.

Due to generations of inbreeding, the immune systems of the Highbreed are compromised, meaning that diseases other lifeforms would be immune to become a massive problem to them.

The Atasians call themselves the Highbreed because they despise every other species and believe themselves to be "above" them (that title actually goes to Celestialsapiens). They also believe that they are the first species ever to come into existence,[1] but they have no proof of it and simply made it up.[2]

Atasians are racist, making no effort to hide their hatred for other races, to the extent they believe that their DNA is the purest of all alien species and seek to cleanse the universe of "lower life forms". To achieve this, they sent advance forces to create the DNAliens using Xenocites to do much of the dirty work. They would also build massive teleporter gates in secret, through which the main armada can arrive before destroying a planet and its inhabitants.

Atasians are fiercely loyal to their commanders. To them, obeying a commander's orders and dying is more important for them than to live.

Atasians do not wear clothes because they completely reject the customs of decency and galactic culture.[3]

Due to believing that their DNA is the purest of all alien species, the Atasians tried to maintain their blood purity for so long that it has led to much inbreeding. This idea of racial purity became their undoing as the lack of genetic diversity in the Atasian gene pool led their immune system to become weak, thereby making them vulnerable to infections, diseases and sterility. Their entire race was rendered completely sterile and without children, the Atasians would become extinct.

Despite dying out, the Atasians did not want to go down by themselves. This spurred their xenocidal rampage throughout the universe to extreme levels; they wanted to take the rest of the universe with them by attacking any species they found or encountered and bringing them to extinction like they were.

During their attempted invasion of Earth, Ben Tennyson used the prototype Omnitrix's DNA repair function to save them. Despite their horrified reactions to their now colorful bodies, Reinrassig III explained to his brethren that Ben had given them a chance to live, having been grateful of Ben for repairing his arm in the past. Moved by Reinrassig's words, the Highbreed called off their attacks and appointed him the new Highbreed Supreme. 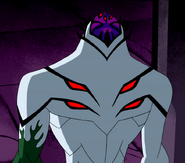 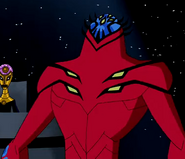 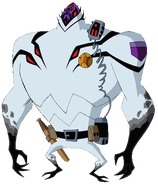