Alien Species
Register
Don't have an account?
Sign In
Advertisement
in: All Tomorrows Universe, Descendants of Man, Sapient Species,
and 8 more 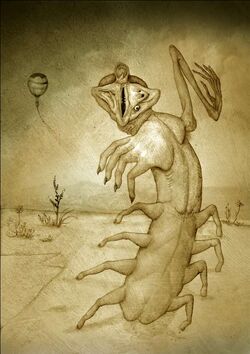 Lopsider homeworld and other planets in its solar system

Created by the Lopsiders from themselves

Nemo Ramjet
The Asymmetric People were a posthuman species that evolved from the Lopsiders.

Within a few million years of the Qu's department, the Lopsiders regained sapience and developed a civilisation. They built flat, bunker-like buildings which were entrances to vast underground cities, and they developed space travel. On the other planets of their solar system, they found similar conditions to their homeworld, but gravity wasn't as strong as they knew it.

After millennia of experiments, they managed to bio-engineer themselves to fit their new homes and evolved into the Asymmetric People. Their shovel-like toes evolved into eight feet, their grasping arm was elongated even more and their asymmetric faces were made three-dimensional again.

Paralleling the history of their Martian ancestors, the Asymmetric People fought a war against the Lopsiders. But differently from their ancestors, the Asymmetric People exterminated the Lopsiders and began to expand beyond their territories. On their way, they also found the remains of the Star People and the Qu and used them to develop their technology even further.

They belonged to the second wave of posthumans joining the Second Galactic Empire founded by the Killer Folk and the Satyriacs.

Over a time span of about 80 million years, the Second Empire developed, through the combined effort of all members, into a galaxy-spanning empire, even though the members never met each other personally, and all of the species colonised other planets.

Though they were prepared to face an alien invasion, the Empire didn't think about an invasion from other posthumans, and so the Asymmetric People, along with all of their cousins, were quickly wiped out by the Gravital as part of their interstellar conquest.