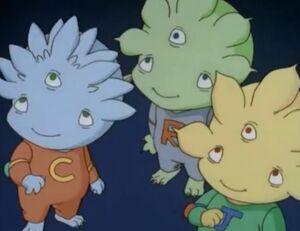 Men in Black
The Astrotots are a group of four diminutive humanoid aliens, and figure among the many extraterrestrial actors whose careers are managed by the M.I.B.'s Hollywood branch, a.k.a. "the Agency". They're the stars of a children's television show, in which they appear in their real forms.

The Astrotots are short, big-headed, three-eyed humanoids with stubby limbs, tetradactyl hands and tridactyl feet. Each of them has a different skin color and different-shaped fleshy appendages on their heads.

Retrieved from "https://aliens.fandom.com/wiki/Astrotot?oldid=198357"
Community content is available under CC-BY-SA unless otherwise noted.