Alien Species
Register
Don't have an account?
Sign In
Advertisement
in: All Tomorrows Universe, Flying Species, Descendants of Man,
and 12 more 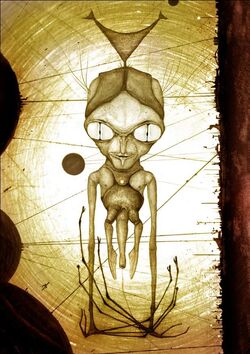 Evolved from the Spacers

Nemo Ramjet
The Asteromorphs were a posthuman species that evolved from the Spacers.

After the spacers joined all of their arks into one giant world built from zero-gravity bubbles, their bodies became even more spindly and single digits evolved into whole appendages, but none of those were used for locomotion because their specialised sphincters propelled them through their worlds.

Most of all, their brains evolved. Free from the burden of weight and gravity, their brains expanded beyond the limits of terrestrial organisms and they started to think in concepts totally alien to their posthuman relatives and human ancestors, which led to them developing philosophy and science far superior to that of their ancestors.

The Asteromorphs expanded by building smaller sub-arks and colonised stellar systems to build a new empire of man, but this time they didn't colonise any planets and only lingered in the outer realms of star systems, silently watching their primitive relatives.

When the Second Empire of Man, founded by the Satyriacs and the Killer Folk and by now completely aware of their history with the Qu, encountered the Asteromorphs, they feared the worst. But after the Asteromorphs turned out to not be interested in the Second Empire, they were accepted as incomprehensible, omnipotent forces of nature and left alone. They continued to develop themselves, their giant brains unfolding into wing-like structures and their finger-derived limbs forming an intricate set of sails and legs.

After that, the Asteromorph descendants took the Gravital's Subjects, who miraculously survived the war, and became true creator gods through terraforming and repopulating the Milky Ways planets with the numerous descendant species of the subjects.

To prevent another genocide like that of the Gravitals, the Asteromorph descendant species decided to watch over and control the newly created worlds. They created an entirely new species of Asteromorphs which were able to survive on planets and the gravity, with long, spindly limbs for walking and smaller brains which nonetheless were still bigger than those of the Subjects descendants. Those creatures were called Terrestrials and still acted under the supervision of the Asteromorphs.

As the new empire was spanning the whole of the milky way, the humans tried to make contact with the indigenous folk of the surrounding nebulae, while still being cautious because of their history with alien invasions, remembering the Qu as well as the invaders that attacked the Bug Facers.

After a time, they found another civilization in the form of a diverse empire ruled by the Amphicephali. Like the posthumans, the Amphicephali had a rich and diverse history and were cautious, but both species finally proved to be mature enough to make contact peacefully. They were the first species to peacefully make contact with humanity, but not the last.

Together, the united galaxies eventually defeated the Qu, cradled their suns with artificial shells, crisscrossed interstellar space with wormholes and made travel a thing of the past. One day, a researcher rediscovered the Earth, humanity's ancestral home, which had been abandoned 560 Million years ago because it was too far away from the main centres of population.

By the time of the All Tomorrows afterword, all of humanity has disappeared for unknown reasons, Perhaps it went extinct through a war or the empire slowly fell apart, leaving single colonies to meet their own fate. Perhaps, it was a mass migration to another plane of existence. The Author of the book doesn't know.