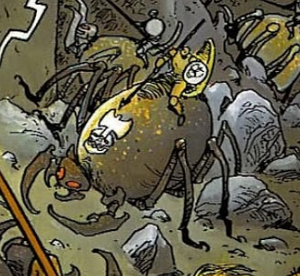 Lanfeust of Troy Universe
The Assault Spider is a creature native to Troy.

Assault Spiders are giant arachnids that are used by the Barons of the Baronies as war machines. They are used as machines of war in siege warfare. Used in the vanguard of attack when scaling fortresses these creatures suffer heavy losses but since they possess high fertility rates this factor mitigates it. Infantry uses their webs to climb the walls to invade their targets.