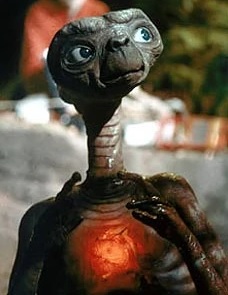 Children of the Green Planet
Vomestran

Carlo Rambaldi
The Asogians or Children of the Green Planet are a species of puddle-footed sapients indigenous to Brodo Asogi. They are most notable for their extending necks, glowing chests and fingers, and potential Force-sensitivity. They are one of the many sapient species within their galaxy to refrain from wearing clothing.

During the final days of the Galactic Republic, Senator Grebleips, who was an Asogian, had an extragalactic expedition project funded, which likely was the one that ended up eventually landing on Earth.

Three Asogians serving as members of the Galactic Senate.