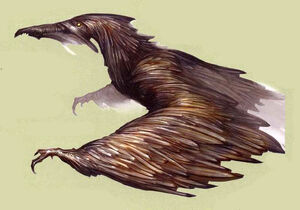 Ash Angels were large avianoids indigenous to the planet Sullust. They subsisted on the harsh surface of the planet by consuming ash. Their bodies had evolved to properly extract nutrients from this ash, which it then shed the powdery residue through their skin. Unlike most avianoid species across the universe, Ash Angels did not possess feathers; instead, they had short, thin strips of tissue covering their wings and back, granting them an appearance of a pile of ash, used as valuable camouflage in the incinerated landscape against their own predators. It was through these strips that they would shed the ashen residue.