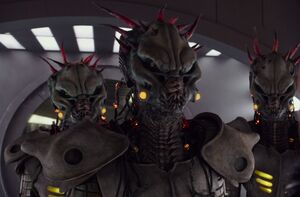 Luc Besson
Then Arysum-Kormn are a race of nomadic aliens who act with an honor-bound system in their society.

Standing two meters tall with an 80 earth-year lifespan, the Arysum-Kormn were the fourth alien species to board the Alpha space station. While they have a somewhat threatening appearance, the Arysum-Kormn are mostly peaceful and spend their time travelling from planet to planet using an alien mineral mined from their home planet, a moon on planet Rekkrdrakstar, called Korbium, which has similar properties to Dilithium, i.e. acting as a power source for their ships. Their nomadic lifestyle has given the Arysum-Kormn a reputation of being the most-traveled species in the known universe. During their travels, the Arysum-Kormn develop an encyclopedic knowledge of the species and planets they encounter in the universe during their lifetime. 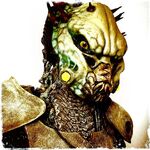 Ironically enough, the Arysum-Kormn act more belligerent than they really are and avoid any involvement in political scenarios as an attempt to prevent political fights between species. And even though the Arysum-Kormn are a peaceful race, they are expertly trained in hunting and live in an honor-bound society similar to the Yautja and the Vikings. They consider firearms as a dishonorable use of weaponry and have their society divided into "sklaans" - one of which called "the Preservers" are Arysum-Kormn given the responsibility of conserving endangered species they encounter in the universe.

Retrieved from "https://aliens.fandom.com/wiki/Arysum-Kormn?oldid=168736"
Community content is available under CC-BY-SA unless otherwise noted.