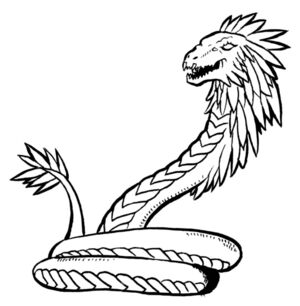 Arrak Snakes were four-eyed avianoid reptilianoids indigenous to the planet Ithor, where they fed on the aerial Shamaroks. They have green eyes and brightly-colored feathered scales. A set of small wings allow them to live amongst the Bafforr Trees in the jungle canopies of the world. They communicate amongst one another through a complex, musical hooting call.

A Clawdite known as Nuri once transformed into an Arrak Snake while battling Boba Fett. He attempted to constrict the bounty hunter before being struck in the chin by his Vibroblade; causing him to change into a Dinko and then a Fefze Beetle.

Retrieved from "https://aliens.fandom.com/wiki/Arrak_Snake?oldid=182748"
Community content is available under CC-BY-SA unless otherwise noted.