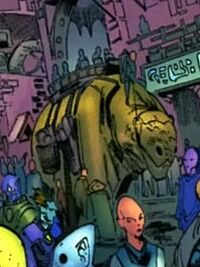 Marvel
The Arquindae (Arquinnius Magnus) is one of the largest land animals native to Sakaar. The arquindae measure approximately 4.5 meters at the hips, with males reaching weights of up to 40 tons.

In the wild, arquindae live in small family groups led by older females, although most adult males live in bachelor herds apart from the females and young. Native to the Twisted Wood and the smaller forested regions within the Vandro and Torkaw river valleys, arquindae consume massive amounts of vegetation on a daily basis, migrating seasonally according to the availability of food and water.

Arquindae were first domesticated by the Imperials in approximately 1000 Pre. Used primarily for farming at first, arquindae soon came to be viewed primarily as military beasts. Outfitted with metal armor and back-mounted howdahs capable of carrying up to 40 imperial soldiers, aquindae were led into battle by specifically trained imperials who had spent years conditioning the great beasts for battle. Arquindae were instrumental in the dominance of the Imperial armies over the Native Hive Kingdoms and were later prevalent when the imperial kingdoms began warring against each other. Today, the arquindae are still used by the Empire in its war against the Fillians. While the drammoths are usually preferred for transportation in the high mountain elevations, arquindae are used for troop movement across the plains and forests.

Retrieved from "https://aliens.fandom.com/wiki/Arquindae?oldid=186591"
Community content is available under CC-BY-SA unless otherwise noted.