Alien Species
Register
Don't have an account?
Sign In
Advertisement
in: Sapient Species, Men in Black Universe, Humanoids,
and 9 more 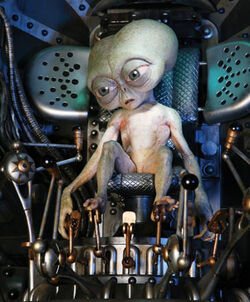 Men in Black
Arquillians are a small sapient alien species from the planet Arquillia.

Arquillians are a species of hand-sized humanoids with greenish-white skin, a large head, large blue eyes, and very long arms and legs.

On Earth, the Arquillians wear Human-sized mechanical suits, which are used for both protection and movement (also hiding their true identity). Much of their energy goes towards operating the mechanical Human suit, but they also have an "autopilot" mode for making their life easier. To get the Human suit to work, they have to download software programs to the brain. Too much information and the computer can have a meltdown, resulting in them divulging their true identity or catastrophic damage to the suit. They also apparently possess an extremely powerful weapon capable of destroying planets.