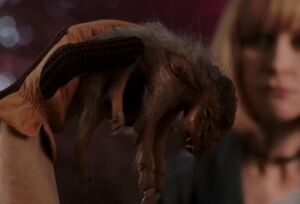 The Arn are a race genetically created by the Rhodians to make Quills into slaves against their will.

The teeth and body shape of the Arn mostly resemble that of a hairless rat. They possess claws relative to the size of a human tooth and are primarily used for digging. They also possess six eyes.

Use by the Rhodians[edit | edit source]

The Arns were genetically altered to be implanted into the Quills by the Rhodians. On Rhodia, the Quills fought against the Rhodians because of their oppressive rule over them. The Quills were implanted with Arns as punishment for their crimes. The Arns they were implanted with were genetically engineered to dig away at the brain of their hosts if said host were to attempt to remove it or harm/kill anyone/anything unless it were for the protection of (a) Rhodian(s).

Even though the Arn are genetically engineered to be mental kill switches for the Quill, they are no less sapient with their own free thought. Like most beings in the universe, they have their own beliefs. The Arn often dream of living a free life like other creatures in the universe and not be genetically created and used as a tool of the Rhodians. The "heaven" the Arn believe in is regarded with their wishes of being free to live and thrive as a species in the wild without the burden of being implanted into the claustrophobic environment of a Quill head.

Retrieved from "https://aliens.fandom.com/wiki/Arn_(Class)?oldid=163938"
Community content is available under CC-BY-SA unless otherwise noted.