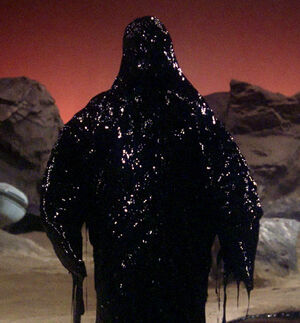 Armus is, as of the 24th century, the sole inhabitant of the planet Vagra II in the Zed Lapis Sector of the Milky Way Galaxy. He is an extremely malignant and hostile entity, made out of a non-organic substance which cannot be properly analysed by Federation tricorders. As it turns out, this substance is nothing less than the essence of evil.

Armus originated as the by-product of an ancient, extremely advanced race which found a way to get rid of all their aggressive tendencies. These evil instincts coalesced into a "second skin", which itself was promptly discarded by the newly-purified beings as they abandoned the planet, leaving Armus behind.

Physically, Armus is a viscous, amorphous black liquid which can assume several shapes, including a vaguely humanoid one. Phaser shots have no negative effect on him, as he effortlessly absorbs their energy. He possess extraordinary psychic powers such as telekinesis and the ability to send out deadly energy discharges which can kill a humanoid easily. He can also teleport people over short distances and create enormous force fields that prevent the use of communicators or transports. Still, his powers are limited, as demonstrated by his inability to leave the planet. He is also capable of engulfing people and keeping them alive inside him while at the same time torturing them mentally.

Armus is extremely sadistic as he takes delight in inflicting pain upon others. He is, although reluctant to admit it, plagued with an eternity of tedium and isolation, and frustrated by having nothing to direct his endless rage at. His greatest desire is to leave Vagra II, but the Federation has put the entire planet on quarantine after the incident of 2364.

Retrieved from "https://aliens.fandom.com/wiki/Armus?oldid=122750"
Community content is available under CC-BY-SA unless otherwise noted.