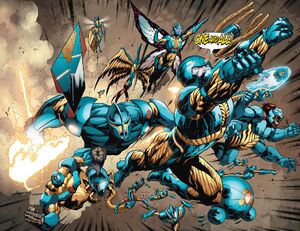 The Armors are a race of sentient techno-plants.

The Armors are a perfect blend of plant and technology. They are capable of bonding with lifeforms giving them enhanced strength, and adaptable techno-organic weaponry. The Armors are capable of impressive feats, such as space travel in mere minutes, energy manipulation, information gathering etc.

Once a host becomes bonded to one, they lose all self and slowly transform into an Armor themselves that will lay in wait to assimilate another life-form and merge with it and covert it into an Armor.

It seems that there are limits to what life-form that the Armors can bond to, such as the Vine, a species that possess a collective hive mind.

All Armors share a connection called the Gatherings, allowing them to connect with Armors across the universe no matter the distance. It is a telepathic communication where the whole species is present.

The origins of the Armors began thousands ago, created by a humanoid race from the planet Gennin. The birth of the Armors started with a young girl named Shanhara, daughter of a brilliant scientist from the planet Gennin. However Shanhara suffered from a disease called the bone plague, an affliction that devastated the populace of Gennin. Her father developed what was suppose to be a solution to the disease, the Armors. The Armors granted those afflicted with the bone plague full lives assisting their weaken bodies .

After the conception the Armors lacked thought and had no will of their own relying on the wills of their bondmates. However the Armors evolved to assimilate the the host, becoming conscious and creating a new species. The resulting birth of this new species caused confusion and anarchy on Gennin leading to complete societal collapse. Shanhara and her father managed to escape the madness. Her father studied Shanhara's condition for decades to find a solution to the error he made. When he at last awoke her from suspended animation, decades later, he explained that he understood what had happened and that her own conversion as an Armor would soon come to pass. He claimed that she was the first of a new species and urged her not to fight it but to embrace it. Shortly before he died, her father programmed their ship to take Shanhara to a distant world with a species that could not physically bond with an Armor so that she may live in peace.

After Shanhara arrived on the planet Loam, she succumbed to the conversion transforming into an Armor. The primitive Vine, encountered Shanhara, those that touched her, briefly merged with the Armor declaring her name, but died, due to their physiology being incompatible. The Vine declared Shanhara a god, and created a religion center around the mysterious Armor, leading to the Vine Empire, millennia later.

When the Armor Hunters began to systematically wiping many of their brothers and sisters across the cosmos, the Armors in a rare event of racial unity united. They launched a wave of retaliation against the hunters, tracking back the fanatics to their home base, slaughtering the entire order of warriors to the last man.

The Armors came again in the Gatherings, under the summons of Aric to discuss the last legacy of the Armor Hunters, Death Hand, a giant planet killer. While many of the Armors wanted to avoid the monstrosity, Aric appealed to them that if they did not do something nowhere would be safe for them. Seeing sense in his words, the Armors, unanimously elected him their king. Together the Armors destroyed Death Hand ending the threat. Aric later released the Armors from his control, ordering them to act as protectors to their worlds, rather than oppressors. He warned them should he hear otherwise any transgressor would answer to him.

The Armors have very little culture and were typically very independent from each other, even among them own kind. However it did not mean they were isolationist, they Armors communicated through their Gatherings, a telepathic congress which all Armors could discuss in a mindscape. Rarely did the Armors interact with each other, only in times of which the species was threatened, did they unite in racial unity. They possessed a hive mind of sort, thus the idea of a leader was unheard of them as the all spoke for "one". They were extremely hostile to the worlds which they inhabited, however this could be the result in which much of the universe regarded them as a plague and thus used only force to defend themselves. Their seemingly invincible powers and near immortality made other civilizations, go to extreme lengths to wipe them out, resulting in planets, becoming desolate wastelands, and Armors to be blamed for the devastation. That tradition changed when King Aric of Dacia rallied them and named himself their king to fight Dead Hand and ordered them to become guardians of their chosen worlds.

Retrieved from "https://aliens.fandom.com/wiki/Armor?oldid=164257"
Community content is available under CC-BY-SA unless otherwise noted.