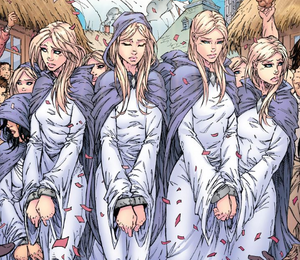 Ariannas are humanoids, resembling Human females, save that they are exquisitely beautiful and are almost identical to one another, possessing fair skin, blonde hair and blue eyes.

According to the pirate Boro, the Ariannas are native to the northern highlands of Montessa, a city of avid tinkerers and inventors. Slavers would capture them to sell to pirates who in turn would sell the to villagers under the thrall of the wizard R'anu. The villagers would trade livestock for them and the Ariannas would be handed over to R'anu. R'anu used them and converted the Ariannas into zeal converts of his own cult of personality, driving them insane in order to fuel his magic. The pirates wold trade the livestock with the Tykthas for ziar crystals to sell to the inhabitants of Montessa.

Retrieved from "https://aliens.fandom.com/wiki/Arianna?oldid=161195"
Community content is available under CC-BY-SA unless otherwise noted.