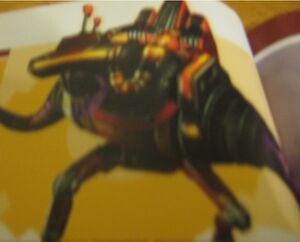 Argonoids are squiggly armed sapients native to unknown homeworld. Argonoids are close relatives to two other sapient species, the Paladrones and the Terraklons, who share much in common in overall appearance. All three races have been ensalved by Emperor Percival Tachyon, who has fight other gladiators for the amusement of himself and his troops on planet Mukow.

Little is mentioned about technology, but it is known that Argonoid gladiators are known to use some sort of mortar launched strapped to their back to attack opposing gladiators.

Retrieved from "https://aliens.fandom.com/wiki/Argonoid?oldid=180619"
Community content is available under CC-BY-SA unless otherwise noted.