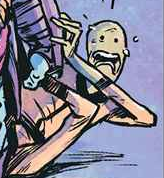 The Argonians are an alien race that existed in Dimension X in TMNT's IDW Universe.

They were yellow-pale spiny humanoids.

Five years prior to the Trial of Kraang, the Argonians were conquered by the Utrom Warlord. Kraang took pleasure in feeding numerous Argonians to his pet, Flippy.

Retrieved from "https://aliens.fandom.com/wiki/Argonian_(TMNT)?oldid=172860"
Community content is available under CC-BY-SA unless otherwise noted.