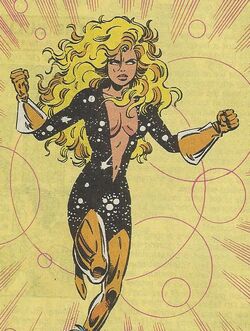 The Arcturans are a sapient, pink-white skinned humanoid species with a capacity for genetic mutation equal to that of the Humans of the planet Earth. Approximately half of their population has become severely mutated due to a combination of biochemical advancements and reactions to radioactive fallout. They possess a technological level comparable to that of modern-day Earth. By the 31st Century, two Arcturans are known to serve as Guardians of the Galaxy.

Retrieved from "https://aliens.fandom.com/wiki/Arcturan_(Marvel)?oldid=180321"
Community content is available under CC-BY-SA unless otherwise noted.