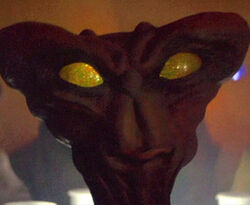 The Arcona (singular Arconan) are scaleless reptilianoid sapients with an overall humanoid bodily structure. They are indigenous to the planet Cona, a desert world located within the Teke Ro system. Surprisingly, despite their large eyes they have poor eyesight; a small organ between their eyes, oftentimes mistaken for their nose, actually helps them to see, perhaps in a similar manner to a tuatara's third eye. They also possess skin that hues from ebony to mahogany. As reptilianoids, they do not possess hair. However, some of their more notable features are their flat, anvil-shaped head, sharp claws and clear, marble-like eyes.

Arcona do not live in an environment that would be considered naturally habitable to humanity. Cona, as a desert planet, is always hot and has very little water to speak of. However, it is the fact that Cona's atmosphere is filled with ammonia vapor that would be considered the most deadly to mankind. Arcona themselves adapted to survive by feeding on ammonia-converting roots of the complex Conan flora as their only source of water, as this is where all water on-world is apparently stored. Because of their naturally ammonia-based habitation, they require it to survive and as a result, Arcona living offworld are forced to take ammonia supplements.

As mentioned above, Arconan eyesight is actually very poor. Their eyes cannot detect fine shapes, only allowing them the ability to sense blurry objects. A small diamond-shaped sensory organ lies between their eyes that works like a heat pit, allowing them to detect the heat signatures of living beings, although it is unknown if they can detect silicon-based lifeforms this way as well. With typical carbon-based life, however, an Arconan often detects specific people by heat signature alone. They also possess olfactory organs embedded within their ever-moving tongues, which helps them distinguish objects in their environment that they otherwise could not make out; this organ gives them a keen sense of smell.

An Arcona's lifespan is roughly that of a Human. Arcona live in loose yet family-oriented communities called Nests where males take care of the young, while females are generally the more reckless and thrill-seeking of the species. These nests are in turn ruled by a Grand Nest. Despite not being a particularly technological species, by the time the Galactic Empire rose to power Arcona could be seen in every corner of the galaxy. They are also notorious for their high susceptibility to addiction to common salt, which to them serves as a hallucinogen as salt deprives the body of water and likely gives them immediate levels of sodium poisoning as it is probably not common on their homeworld. This addiction will turn their eyes from its stereotypical green hue to a tell-tale gold coloring should their addiction prolong without end.