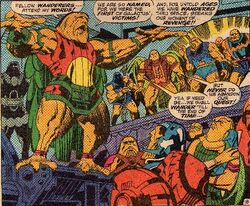 Marvel Comics
The Archeopians were a race of sapients that once inhabited their homeworld, a planet known as Archeopia.

When Galactus' incubation ship came upon their planet, they left the object undisturbed and in orbit around their planet. Unfortunately for them, a group of would-be invaders came to the planet and mistook the huge ship for a planetary weapon, and proceeded to attack. This led to Galactus to finally awaken, and he destroyed the entire invasionary fleet with but a gesture. It was not long at all when the gargantuan being discovered its newfound and uncontrollable hunger for energy. Archeopia became the first world to be devoured by Galactus. While a small handful of ships escaped Archeopia with their lives, they eventually found themselves prey to Ego the Living Planet.