The Arathim, collectively known as the Ascendency, are a hive-minded species of sapient insectoid predators from the planet Thra. They naturally inhabit caves and are known to prey on Gelflings.

At least two different castes of this species are known to exist: the hunting Silk Spitters and the diminutive Threaders. The Silk Spitters are fast, dark grey hexapod predators which can cling to walls and ceilings, and shoot strings of silk to immobilize foes.

The Threaders, on the other hand, are small, tripedal, and flower-like. Their main function is to cling to the faces of other creatures and take control over their minds, linking them to the Arathim collective and turning them into complacent slaves.

Every member of the Arathim species (as well as other beings controlled by the Threaders) is part of a unified whole. If one is hurt or killed, they all feel it.

Despite being viewed as a hostile race (particularly by the Gelflings), the Arathim do have the capacity to be reasonable and form alliances with former enemies to fight against a common threat. They believe if an individual saves the life of a single Arathinm they are indebted to save the life of their rescuer in return. One even went as far as to show affection by hugging a Gelfling after the two races collaborated in a victorious battle against the Skeksis.

The Arathim used to inhabit the Caves of Grot, but were driven out by the Skeksis when they refused to recognize the Skeksis as their masters. The Skeksis, still posing as benevolent rulers, gave the caves away to the more placid and easily-controlled Gelflings, thus giving rise to the Grottan clan. 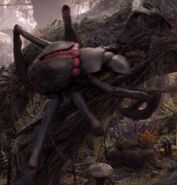 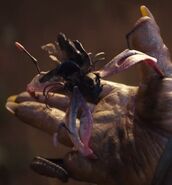 Threader
Add a photo to this gallery
Retrieved from "https://aliens.fandom.com/wiki/Arathim?oldid=156237"
Community content is available under CC-BY-SA unless otherwise noted.