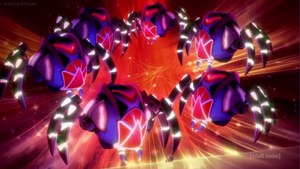 "Are you really willing to endanger everything for him?"
―Arachnitect to Gary Goodspeed

The Arachnitects are a ancient cosmic race of god-like mechanical beings and the creators of the Titans, who they formerly worked with to layer the dimensions of the universe.

Arachnitects are an giant spider-like mechanical abominations with purple-colored spherical bodies, three pairs of legs with luminescent stripes and six red eyes-visors, that blink when talking.

They're capable of weaving threads that can support the universe. They are able to move through dimensions even summoning other beings to them.

The Arachnitects were created by the mysterious beings of unimaginable light to create the Titans, they helped layered the dimensions of the universe. When they reached the end of the Universe they found a place of endless darkness where an unconquerable evil lived named Invictus. Invictus poisoned the Titans leading to rampage across the cosmos. The Arachnitects managed to imprison Invictus and the Titans with the help of the remaining free Titan named Bolo.

Though the Titans were imprisoned they continued to claw at the dimensional walls leading to a rift that opened in the vicinity of Earth. John Goodspeed of the Infinity Guard managed to seal the rift at the expense of his life. A piece of Final Space was released and soon crystallize becoming the planet-destroying alien being known as Mooncake. 32 years later after Gary Goodspeed discovered Mooncake, coming in conflict with John Goodspeed's old partner Jack or known as the Lord Commander who wished to use Mooncake to open Final Space to obtain godhood.

In the chaos Earth was brought into Final Space, but the rift was sealed. The Arachnitects taking notice of Mooncakes actions decided to capture him and return him to Final Space so that their would be balance. After Mooncake managed to seal a rift it convinced the Arachnitects that Mooncake could preserve the balance and protect the universe and allowed him to stay with Gary.

After Bolo was freed from Inner Space, he summoned the Arachnitects and ordered them to open a rift to Final Space. Surprised by his release the Arachnitects were hesitant to open Final Space and rise an incursion only for the enraged Titan to declare he would kill all the Titans and Invictus. Seeing his seriousness they complied but informed him once he passed through he they would seal the rift.

Retrieved from "https://aliens.fandom.com/wiki/Arachnitect?oldid=185853"
Community content is available under CC-BY-SA unless otherwise noted.