Alien Species
Register
Don't have an account?
Sign In
Advertisement
in: Ben 10 Universe, Sapient Species, Races of the Milky Way Galaxy,
and 17 more

Appoplexians resemble muscular bipedal tailless tigers with individual claws sprouting from each wrist. They have white, cream, or dark pink muzzles, hands, stomachs, chests and feet. They also have four-fingered hands, three-toed feet, quill-like eyebrows over each eye, and black stripes on their head, shoulders, back, and legs.

Though most Appoplexians have orange fur, some can have white fur if they evolve in colder climates. Examples include Appoplexians from Dimension 23[1] and Negative Rath.

Besides orange and white, Appoplexians can come in other colors. For example, Malice has dark orange fur, Dario has brown fur, Muck has maroon fur, and Skraprr Byakko has yellow fur.

Appoplexians have immense strength that gives them an advantage in combat, allowing them to power their way through many opponents and smash through tough defenses with relative ease. Technically speaking, they are strong enough to lift and throw a Cascan.

Appoplexians are durable enough to withstand a powerful laser at point-blank range without a single scratch. For Omni-Kix Appoplexians, their natural durability is increased thanks to their Omni-Kix armor.

An Appoplexian has a pair of sharp claws on their wrists that can both extend and retract. These claws are very durable, as they do not break off when bitten by Bashmouth's Species.

By stabbing the ground, Appoplexians can create a shock wave strong enough to burst a rock into rubble or knock something over.

An Appoplexian's wrist claws are fireproof, allowing them to cancel out a Pyronite's attacks.

Appoplexians have variable levels of intelligence, they can memorize law enforcement protocols despite their brains being hardwired for aggression.

Like ordinary Earth tigers, Appoplexians are capable of running on all fours. Technically speaking, they are fast enough to keep up with Transylians.

Omni-Kix Appoplexians have three sharp, retractable claws on each wrist, increasing the amount of damage they can cause.

Due to the nature of their mentality, the Appoplexians' greatest weakness is their highly aggressive temperament. Because of their obsession with violence and anger, they are difficult to stop once they start fighting.

An Appoplexian's temperaments can cause them to easily forget things and become easily distracted. This has been demonstrated with chasing after meat.

Because they are mentally cat-like, Appoplexians can also be distracted by and chase after dots of light and smaller animals such as mice and rabbits. Consequently, Appoplexians are vulnerable to being mind-controlled by a Metahuman with the same powers as Nyancy Chan.

Certain high-pitched sounds are fatal to Appoplexians, meaning that their hearing is sensitive.

Despite their enhanced strength, Appoplexians are unable to disconnect a young Revonnahgander's bi'nthak with their wrist claws. Technically speaking, they are physically weaker than Tetramands.[2]

Appoplexians can be lifted by a species with as much strength as a Zaroffian.

There is a limit to an Appoplexian's dexterity, as they cannot write a text message properly.

Appoplexians are vulnerable to being subdued by the Hephaestan Neuro Grip.

Appoplexians can be affected by magic, as there are spells that can constrain them in midair and thrash them abound using telekinetic-enhanced streams of water.

Appoplexians can experience fear in the presence of Toepick's Species.[1]

Appoplexians are powerful, argumentative, and extremely aggressive. They have the urge to fight anything that breathes because they believe that any problem can be solved by hitting it "a lot". This anger even extends to inanimate objects, and can lead to harm for both themselves and others.

Appoplexians have animalistic tendencies such as growling, roaring, and relentlessly seeking food when hungry. These traits may often cause them to follow their natural instincts under certain circumstances, which will subsequently override their mindset and completely distract them from whatever they might be doing.

A select few Appoplexians such as Skraprr Byakko and Negative Rath[1] are more level-headed and reasonable, being able to respectably ask questions and listen to others without arguing. However, they can become aggressive, impulsive, and very eager to fight like the rest of their kind when provoked.

Appoplexians have had a few female leaders over the years.[1]

Appoplexian bathroom habits are very similar to that of house cats and kitty litter boxes, which led to an incident on the Lewodans' home planet. Thanks to help from Ben Tennyson, the Appoplexians have recently formed a truce with the Lewodans.

Appoplexians are good friends with the Vaxasaurians due to their prowess in gladiatorial combat.

Despite their aggresive behavior, Appoplexians are more technology advanced than Humans. For example, they have the means of traveling through space and engaging with other species.[1]

Because of their disjointedness, Appoplexians are prone to mixing up metaphors and beginning a conversation with the phrase, "Let me tell ya somethin'....!", followed by either a person's full name or position. For example, Rath refers to Khyber as "Mr. Self-Proclaimed Greatest Huntsman in the Galaxy", Vulkanus as "Baby Man", and Grandpa Max as "G-Pa Max".

Accented Appoplexians such as Mad Ben's Rath would say "Oi!" prior to their usual catchphrase.[1]

Appoplexians such as Nega Ben's Rath would have a dour personality. Rather than their usual catchphrase, they would instead say "I don't wanna tell you anything."[1]

Undead Appoplexians would act backwards and begin a conversation with the phrase, "Let me no tell you things!"[1] 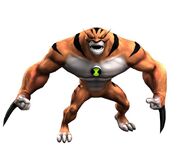 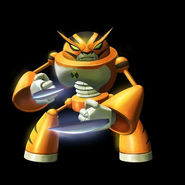 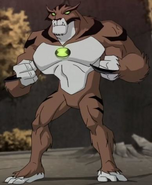 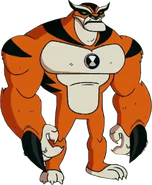 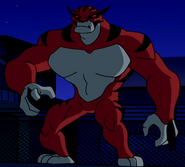 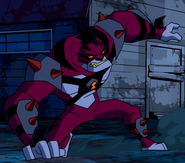 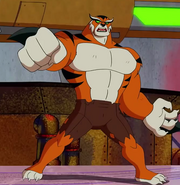 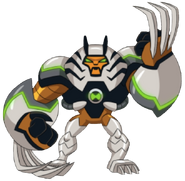 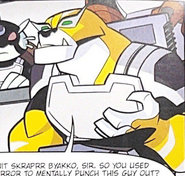