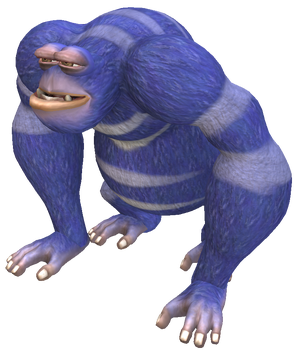 Maxis
The Ape is a primate-like creature that is found within the SPORE Universe. They have numerous physical traits with the Hominoidea from Earth, which consists of the great apes and Humans.

Troops of these animals evolved into the Aepox race, which is an intergalactic species with similar behavior to the Ape.

Apes are fairly muscular creatures, with larger front arms and stocky back legs. They have ape-like faces with forward-facing eyes, and both their front and back feet have apposable thumbs for manipulation of objects.

Although Apes aren't very strong when compared to actual predators, they are very quick to temper and will attack when provoked. They are more well known for sneaking around than direct confrontation however. This sometimes leads them to become easy prey if caught in bad conditions, or out alone.