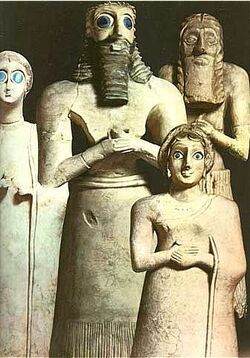 Figures believed to be the Anunnaki

Anunnaki (Akkadian -ki, Sumerian: Anunna,[2] meaning “offspring of Anu”) are a group of entities that were deified by various cultures in Mesopotamia.[3] The Anunnaki are a major study in the Ancient aliens hypothesis.

To the ancient Mesopotamians, their supreme God was known as "An" (Sumerian: AN Cuneiform: 𒀭 ).[4] His children were called Anunna. The Akkadians added -ki (meaning “Earth”, or “under”) which denotes that the princely Anunnaki, the “Children of Anu”, had come down to Earth. Succeeding cultures used the first grapheme, i.e. A, in their alphabet to represent the supreme One, such as the letter aleph (Canaanite: 𐤀, Hebrew: אֱ), or alpha (Greek as in Alpha and Omega). The “Children of Anu” (Mesopotamian) eventually translated to “Children of El (𐤀𐩴)” in Canaanite culture. The Israelites later adopted El, as God,[5] to become Elohim אֱלֹהִים “sons of God”[6] (ie. Gen 6:4).

The Anunnaki are a major subject of the Ancient aliens hypothesis, and have often been related to the biblical Watchers (Books of Enoch), the “sons of God” in Genesis 6:4 who are the progenitors of the nephilim. The name Anunna has also been translated as “Those Of Royal Blood”[7] and even “star rulers” as the first symbol in their cuneiform name is 𒀭 (An) originally meaning “star”.[8]

Author Christian O'Brien has suggested a connection between the biblical Watchers “sons of God” (Gen. 6:4) and the Tuath Dé “tribe of god”. The Tuath Dé are said to be a race of ancient entities who descended to Earth on the sacred hill of Tara in prehistoric Ireland.[9] Interestingly, the Irish legend of Tuath Dé has also been translated as “people of Anu” (As related to Danu, an Irish goddess).[10]

The Lacerta Files speak of the Illojiim (Elohim) who came to Earth from the Aldebaran System and evolved the human genome to produce the modern homo sepian.[1] If these are who the Sumerians called Anunna[ki], it would coincide with the mythologies that they helped humans to develop the first human civilization of Sumer, and had taught them not only language but other advanced skill sets.[11] Of the Anunna, the “abgal” (Sumerian) were these teachers, who were known as the “seven wise sages”.[12]

Lacerta describes the Illojiim (Anunnaki) as “tall humanoids who were pale looking, blond with blue-eyes” and were light sensitive.[1] In a research report, it was found that the elite and nobility who organized the earliest known agricultural civilizations all shared the trait of being blue-eyed, seemingly coming from the same bloodline. The ancient Sumerians thought that blue eyes were a sign of the gods (i.e. the Anunnaki). Sumerian nobility were blue eyed and fair haired, as most of their busts show.[13]

In the 1920s, the Vril Society of NS Germany, allegedly made contact with beings from Aldebaran (which connects the Anunnaki) by channelling them through esoteric means.[14] They were in pursuit of technologically advanced designs for the Nazi party to gain a future foothold on the World Theatre (See Nazi UFO space program).

Retrieved from "https://aliens.fandom.com/wiki/Anunnaki?oldid=169406"
Community content is available under CC-BY-SA unless otherwise noted.