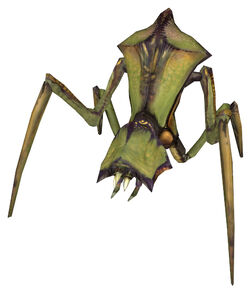 Dhabih Eng
Ted Backman
The Antlions are large, voracious alien insects of several differing castes, with a hierarchy very similar to that of ants.

Antlions are social creatures living in large underground colonies. They are blind and use pheromones and vibrations to identify other living beings. They come in several types, some of which are separate castes.

Antlion Soldiers are the most visible element of Antlion society, most of which is kept hidden in fiercely defended underground nests. It is not clear how Antlions breed; one resistance member is heard referring to a "spawning season" at the beginning of the Highway 17 chapter, but whether Antlions mate separately, have a queen/drone system or practice something completely alien to Earth sensibilities is not known. Their young begin life as larvae in blue honeycombs similar to those of bees.

The extract of these larvae is highly prized by the Vortigaunts for its ability to "divide the false veils of the vortessence" when imbibed. This seems to augment their natural powers. It should be noted that when they imbibe the extract, they glow purple and look very similar to how they did in the beginning of Episode One. It may be speculated that they were in this state when rescuing Gordon.

The larvae grow into large grubs, which are attended to and protected by Antlion Workers and Antlion Guardians. Within this system, common Antlions presumably serve as hunter-gatherers. Inside their nests, decomposed bodies of other creatures can often be discovered, trapped in the viscous silk the grubs produce as a food source, and some of their deepest chambers are pooled with blood. The grubs also produce a substance that possesses healing properties similar to those of a medkit.

Barnacles appear to be one of the few effective predators for Antlions, as they are commonly found in Antlion cave systems. The Antlions, being blind, are often unable to detect their 'tongues,' and as a result become easy meals. They might also serve, however, to deal with any invaders hiding in the water, as Barnacles often hang over pools of water.

Antlions were once farmed by Vortigaunts for their larval extract and a number of other purposes, possibly on their homeworld (no Xen creature is native from there); the Victory Mine Vortigaunt states that Antlion husbandry was once their ancestral practice. Since the Combine invasion of Earth and the beginning of the Portal Storms the Antlions have established themselves on Earth. They have obviously been very successful in doing so, possibly to the point of causing extinction to other kinds of Earth fauna. So widespread were the Antlions on Earth that the Combine had to install a large network of Thumpers around Nova Prospekt, as well as a vast variation to the base of the Citadel. When these were shut down by Gordon Freeman's activities, both Nova Prospekt and City 17 were quickly overrun separately by Antlions, with chaotic results.