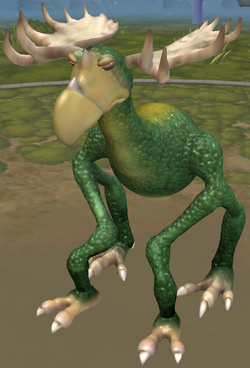 Maxis
Antler Guys are a omnivorous species found on several planets of the galaxy.

Antler Guys are named for their moose-like antlers on their heads. Their heads have a large armored beak, with dark green scaly skin. Their legs, although ending in four clawed feet, connect at the ankle.