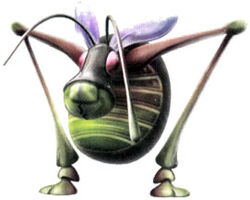 Pikmin
The Antenna Beetle is a cricket-like creature that can be found within PNF-404's humid, dimly lit areas.

The Antenna Beetle is a bipedal, insect-like animal. They have two, extra-long legs holding its abdomen up off the ground. Its head is elongated, ending in a sideways "beak" like maw. It has small wings on its back, too small to be used for flight but are used instead to amplify its calls, much like Earth crickets and grasshoppers. True to its name, it has a set of long antenna growing from its head.

Studies of the creature's body are always done on PNF-404, as past reports say that taking it off planet will make the decomposing body rupture into an explosive mess.

The creature itself is harmless, more likely to jump away than to fight (if it's able to fight). It is capable of jumping a hundred times its body length in one jump to escape from predators.

The ability that its best known for is its call: with vibrations of its wings, it creates an amplified call that sounds like a Hocotatian whistle, but warped and vibrating. This specialized call has strange effects: it can control Pikmin with this specialized frequency for defensive purposes. This call also warps and malfunctions scanners and sensors, many explorers reporting how a call from an Antenna Beetle (or even the mere presence) is enough to make detectors go haywire.