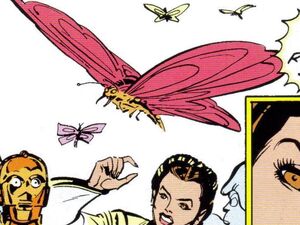 Unspecified world in the Antares system

The Antarean Poisonous Butterfly was a species native to the Antares system. A red butterfly-equivalent species, it was capable of delivering a deadly nerve toxin through its stinger; however, if their species was similar to Terran insects, then only females would have possessed this stinger (as on Earth they are converted from ovipositors, an egg-laying organ.

Although the species had been extinct in its native habitat for fifty years, C-3PO spotted one within the Garden of Butterflies in New Escrow, Aargau. It was this identification that led Princess Leia to determine that the creature was in fact Darth Vader's secretary, a shapeshifter that was at the time attempting to assassinate Viscount Tardi. At her command, R2-D2 downed the faux insect with a flame retardant, and Leia promptly crushed it underfoot.

Retrieved from "https://aliens.fandom.com/wiki/Antarean_Poisonous_Butterfly?oldid=178036"
Community content is available under CC-BY-SA unless otherwise noted.