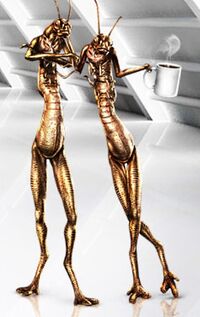 Unknown, but known to enjoy coffee

Men in Black
The Annelids, also known colloquially as Worms, are a species of diminutive bipeds native to Takwalla.

They have two main arms, as well as additional pairs of small, stubby arms on their chests. On their heads are two antennae. Their legs are digitrigrade, and their feet have three toes each. They do not have spines. Their regenerative abilities allow them to literally pull their bodies together after being cut in half.

Not much is known about their culture on their homeworld, but living on Earth includes a lack of oversight from the Annelids' emperor. Most Annelids venture on hedonistic binges, partaking in vices that are forbidden on their homeworld; most notably the consumption of coffee.

Shortly after being recruited by the M.I.B., Agent J saw the Worms smoking and drinking coffee in the agency's break room; an incident which convinced him that aliens were real. The Worms later tried to leave the building; and presumably the planet; with their luggage (one of them carrying nothing but a luggage cart full of cartons of cigarettes), since they feared that the Earth was about to be destroyed by the Arquillian fleet.

Although they usually spend their time hanging out in the break room and drinking coffee, the four Worms occasionally help Agents K or J with their work. However, their obsession with coffee often gets them into trouble. On several occasions they have sneaked out of the M.I.B.'s headquarters and accompanied J and K as blind passengers in their missions, mostly due to misunderstandings involving the prospect of getting more coffee. The Worms have helped J on several occasions to take the headquarters back after an invasion.

One alternate future timeline resulted in the Worms becoming the dominant race on Earth, after the Worms got slimed and multiplied.

On another occasion, one of the Worms got kidnapped by the Fmecks because they mistook him for an alien scientist who had invented a growth serum. The Worm was later rescued by J and K, but he mistook the growth serum for coffee and grew to the size of a tall building.

An incident with a Kalifadik teleportation ray once caused J and one of the Worms to start becoming mutated versions of each other.

During an attempted invasion by the Kylothian agent Serleena, the Worms assisted J and K by watching over Laura Vasquez, and helped to infiltrate the headquarters to stop Serleena.

The Worms played the bagpipes at Agent Zed's funeral. They later tried to flee the Earth once again, pulling suitcases through the lobby of M.I.B.'s headquarters when the Boglodites were invading Earth.

Retrieved from "https://aliens.fandom.com/wiki/Annelid?oldid=183375"
Community content is available under CC-BY-SA unless otherwise noted.