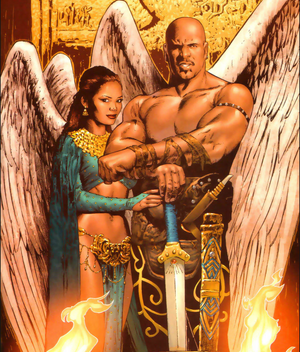 The Ankharans are a race of winged humanoids from the planet Quin in the CrossGen Universe.

The Ankharans are dark skinned humanoids. One of their prominent feature are their white wings that sprout from their backs, giving their race the ability to soar through the air.

The Ankharans hails from Ankhara, one of the Five Lands of Quin.

When the human warlord Mondath’s lead a campaign that nearly conquered all of Quin, the Ankharans we’re part of alliance of the Five Lands that defeated the mad warlord.

Three centuries later, Mordath had returned as a revenant and once again launched a campaign of conquest. Ankhara was among the nations he conquered. The troll army occupied the Ankharans reducing them as slaves and plundered their treasures.

While many of the Five Lands have been thoroughly subjugated, Ankhara resists the troll occupation.

The Ankharan civilization was regarded as the pinnacle of the Five Lands. Their cities hewn from cliffs, were centers of learning in times of peace and impenetrable fortresses in times of war.

Their culture is reminiscent of Ancient Egypt, with Ankharan writing similar to hieroglyphics. The Ankharans are famously aloof. They are a proud race that do not ask for help easily. As a race that soar the skies they call themselves the People of the Sun, and view other races to be inferior, referring them as mud-walkers.

The Ankharans are polytheistic sun worshippers, revering the god Amun-Set.

Retrieved from "https://aliens.fandom.com/wiki/Ankharan?oldid=181701"
Community content is available under CC-BY-SA unless otherwise noted.