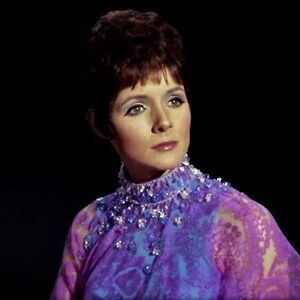 Unknown planet in the Minarian System

Unknown (neither verbal nor telepathic)

Star Trek
The Anjurwans are a sapient species of humanoids which are completely mute, but possess extremely-developed empathic abilities that allow them not only to sense the emotions of other beings, but to share their feelings as if their nervous systems were connected, and to heal injuries by transferring their own vital energy.

Members of this species appear physically identical to Humans, but notably lack vocal cords. They don't even have vestiges of them, suggesting that they simply evolved without the capacity for speech, and aren't capable of telepathy either. They seem to be capable of hearing, and of instinctively understanding others, which is likely due to their empathic nature, but how they communicate among themselves is not known.

The natural empathy of the Anjurwans allows them to experience what others are feeling and to alleviate suffering and physically heal wounds of other beings. When an Anjurwan heals another being, the being's wounds and injuries will become visible in the body of the Anjurwan before fading. The process drains vital energy from the healer, and the more serious the injury, the more they will be drained, putting the Anjurwan's own life at serious risk.

Anjurwans are native to the Minarian System, to a planet other than Minara II; which is a barren world, inhospitable for humanoid life. In 2268, the Minara sun was about to go nova, threatening all life on the system. An advanced race known as the Vians had the resources to save the population of only one planet. Unsure about which planet to save, the Vians transported an Anjurwan female to Minara II to "test" her and determine if her species would be worth saving.

On Minara II, the Vians performed experiments on the two resident scientists from a Federation research station, which eventually resulted in their deaths. When the USS Enterprise arrived to evacuate the station before the sun went nova, Captain Kirk beamed down to the planet along with First Officer Spock and Dr. Leonard McCoy, and the Vians transported them to their subterranean complex to subject them to experiments as well. In reality, the one being tested was the Anjurwan woman, which was found by the party and given the name "Gem" by Dr. McCoy. Despite being somewhat frightened, Gem followed the three men and observed their qualities. She saw how determined they were to live and escape in spite of the obstacles imposed by the Vians, and observed how each of them was willing to give his life to protect the others.

The Vians forced Kirk to choose one of his men (Spock or McCoy) to undergo a brutal test that would almost certainly result in death for a Human like McCoy, or in permanent insanity for a Vulcan like Spock. McCoy used his medical hypospray to leave Kirk and Spock unconscious so that there would be no choice and he would be the one tortured. The experiment left McCoy in a state of near-death, and Kirk and Spock tried to convince Gem to save him, but the gravity of the injuries meant that to do so would probably result in her own death.

Reluctantly overcoming her fear and self-preservation instincts, Gem tried to give her own life to save McCoy's, but McCoy himself pushed her away and didn't allow her to. Kirk confronted the Vians, pointing out their passive attitude in watching the potential death of McCoy or Gem while they could easily heal McCoy themselves without anyone having to die. Convinced that Gem had proved her worth, the Vians finally healed McCoy and left the planet with the nearly-unconscious Gem (exhausted after giving off so much vital essence) to save the rest of her species before the sun went nova.

Retrieved from "https://aliens.fandom.com/wiki/Anjurwan?oldid=173753"
Community content is available under CC-BY-SA unless otherwise noted.