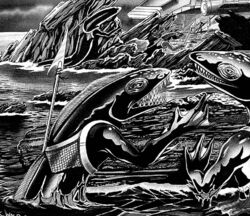 Star Wars
The Anguilla are a species of oceanic (presumably pelagic), eel-like organisms indigenous to the planet Alluuvia, which is located within the Elrood Sector.

Anguilla are elongated aquatic creatures, and can be distinguished from Earth eels by their long arms ending in powerful hands and webbed fingers (for propelling them through the water) and infrared vision.

Anguilla lead a primitive lifestyle as nomadic hunters, following the migration paths of schools of the local fish. Leadership is determined through tests of strength, known as the Rites of Conch-tar.

They were discovered by the galaxy as a whole - specifically by the Galactic Empire - not long after the Battle of Yavin. A bigoted Imperial Private shot the first Anguilla he saw upon arrival on the planet on sight, and his fellow Imperial soldiers followed suit, leading to a massacre of their people.

In defense against these would-be encroachers, the Anguilla were aided by the Rebel Alliance and led by Anyar in destroying the local mining base run by Imperial Mining, Limited. Anyar then negotiated for Radell Mining Corporation to mine the minerals, which are toxic to Humans, that fill Alluuvia's oceans instead, on the condition the mining would be overseen by the Ithorian Iych-thae.