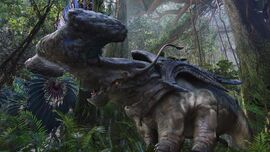 Open Fields (known as a visitor of the jungles)

The Hammerhead Titanotheres, known as Angtsìk by the Na'vi, are massive creatures that inhabit in the rainforests of the jungle moon of Pandora.

It is approximately eleven meters long, which is almost twice the size of an elephant, and is essentially a six-legged, monstrous version of Earth's extinct group of animals called Titanotheres, hence the name. 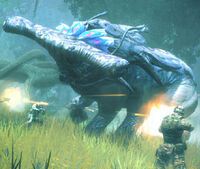 This massive, grazing creature travels in moderately large herds or packs of 10-20 animals. It is moderately social, but also extremely territorial and hierarchical. Constant threat displays, both visible and audible, are very common during the Hammerhead Titanothere's day. When angered (which happens easily and very often), a Titanothere will lower its head and charge at the perceived threat. The sheer momentum and ferocity of this display is usually enough to send any Pandoran creature running for cover, including Mountain Banshees and even Viperwolves. When wanting to avoid battle, Hammerheads will raise a large "Fan" of brightly colored feathers on the top of its head. This display, usually accompanied by a loud roar, is usually enough to send many animals running away.

Hammerhead Titanotheres group together when attacked by a Thanator or Leonopteryx, which are their only known predators. Many Titanotheres charging at a perceived threat is even more intimidating than a single angry Titanothere.

In the juvenile animal, the imposing "hammerhead structure" is formed of cartilage rather than bone. It can also bend to allow the animal to pass through the restricted spaces which an inexperienced young hammerhead might encounter. As it matures, the structure ossifies, and becomes solid bone. Fighting males will attempt to injure their opponents' eyes with the knobs at the ends of their hammers. The titanothere is highly territorial. Alpha males use their considerable momentum to spread their scent by smashing trees, thus warning other animals (including other Titanothere bulls) to steer clear.

The Hammerhead Titanothere has poor distance vision, but makes up for this with acute hearing and an excellent sense of smell. Although massive, its six limbs allow it to pivot rapidly when it detects a threat from the side or rear. The animal's overlapping body plates and large, boney shoulder and back offer protection during battles with other Titanotheres or large creatures such as the Great Leonopteryx or the Thanator.

Retrieved from "https://aliens.fandom.com/wiki/Angts%C3%ACk?oldid=180306"
Community content is available under CC-BY-SA unless otherwise noted.