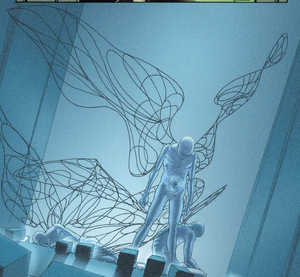 The Angels is a tentative name given by the Planetary scientists to call a trio of angelic constructs that were found in Germany.

The Angels are blue crystalline constructs, with wire-framed wings, capable of flight. They are humanoids with a protruding belly filled with stars. The scientists believe that the Angels are alive in some way, but they possess very limited brains. They are capable of surviving in a vacuum and are able to reach supersonic speeds at Mach 2. Their telemetry ability is more akin to whalesongs rather than radar or sonar.

The angels came to Earth in Germany during the 1930s and since then they have been under the administration of Planetary.

According to the current Planetary theory, a race in the Galactic Core sent the angels out to document the Milky Way. Dr. Kwelo theorizes that the angels have some sort of internal clock that will reach out and order the constructs to return home one day.

The Angels seem to possess limited personalities, almost childlike, and only care for recording new information. When shown something new they will readily agree to explore, and declare their love for the new stimulus.

Retrieved from "https://aliens.fandom.com/wiki/Angel_(Wildstorm)?oldid=181270"
Community content is available under CC-BY-SA unless otherwise noted.