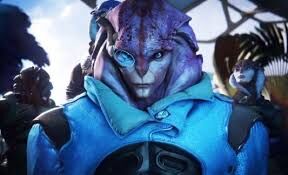 Mass Effect
The Angara are a sentient species native to the Heleus Cluster in the Andromeda Galaxy.

The angara are humanoids, but their lower legs are bowed backwards significantly, along with relatively wide shoulders and narrow hips. Another distinguishing trait are the folds of flesh on the sides of their heads. The angara are sexually dimorphic: male angara are taller than females, and females have narrower hips and rounder faces. They are resistant to cold and also rely at least partially on photosynthesis or some similar process to get energy from sunlight. Lack of real or artificial sunlight causes them to "go dark."

Skin colours feature various shades of blue or mauve, sometimes shading into green or tan. Their blood is deep blue in colour. The angara have a unique control over electromagnetism. Specialized skin cells and organs allow them to generate and control electromagnetic fields artistically or unleash them in combat.

Another interesting facet of their biology is that the angara possess inherit memories, enabling them to recollect memories and experiences from their ancestors.

Due to development on separate planets homogeneity of angaran culture has more or less been diluted, leaving striking differences in angaran social norms that are yet to be reconciled.

Though common links can be established. Universally the angara prize familial unity, preferring to live, work, and raise children in extended family groups.

In politics, factions tend to emerge from these extended families with leaders elected by popular support.

Religion plays an important role in angaran life. Angaran children are raised from birth to follow their family's spiritual traditions. While many of the various angaran religions teach about an equally number of spiritual figures and paths of the betterment of the soul, one common teaching is that "the soul can be heard when the mind is still."

Another common motif is the idol: Zorai. To the Angara, he is both a warrior and scholar that traveled the world and gained knowledge.

The angara also believe that the growth of a soul continues after death, through rebirth. Reincarnation plays a pivotal role in angaran culture. In thier beliefs when a person dies, they are reborn within the same family. If that person lived a good life in its past it signifies to greater enlightenment in the next.

Heirlooms also play an important role with ancestors. To them when a soul returns to their families, they believe heirlooms can bring back memories of the past.

Retrieved from "https://aliens.fandom.com/wiki/Angara?oldid=168734"
Community content is available under CC-BY-SA unless otherwise noted.