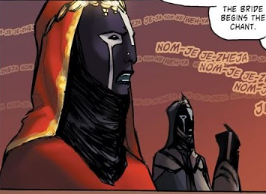 They are tall-slim humanoids with black skin. The Ang-Kibuni are a long-lived species, living four times longer than Hominos (Humans).

The Ang-Kibuni are a tribal society, living in the deserts of Revad. They cloth themselves in long robes and wear turban like adornments called kiri. They are a spiritual people, respecting their environment and the creatures they share with it.

The Naj-Suri especially holds a cultural significance to the Ang-Kibuni, as confronting a naj-suri is required by the bride of a soon to be wed couple in order to be married. During the ritual called the bridal hunt, the Ang-Kibuni party paint themselves and their ha-ruhs in the same patterns as the feline so that the beast would recognize them as its own. The Ang-Kibuni are tested by the na-suri through a chase, after cornering the feline, the bride must capture the spirit of the naj-suri through a dance of their robes to show her courage to her future husband and her children. This part of the ritual is dangerous as should the Ang-Kibun's spirit not be strong enough to tame it, the ritual may result in a mauling of the bride. If the dance is successful the naj-suri will lie down and allow her to pet it, signifying both have acquired a piece of each other's spirit during the ritual.

Retrieved from "https://aliens.fandom.com/wiki/Ang-Kibuni?oldid=161213"
Community content is available under CC-BY-SA unless otherwise noted.