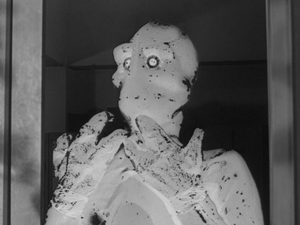 "Electromagnetic force, intelligence, matter, space, time... All the same."
―Andromedan, "The Galaxy Being"

The Andromedans are a sapient extra-galactic race which can exist in a material state or in a state of pure electromagnetic energy. They hail from the galaxy of Andromeda, and consider some races, such as humans, to be a danger to other galaxies. As a result, individual Andromedans are forbidden to establish communication with such races.

Physically, members of this species look like glowing humanoids with bright spherical white eyes and three-fingered hands. They notably have no mouths or nostrils, and don't appear to be familiar with the concepts of eating and smelling. While they do not see in the same way as humans, they can perceive people by detecting their brain patterns.

Biologically, this species is nitrogen-based. However, they can also exist in an imaterial electromagnetic state, which makes them effectively immortal. Besides that, the aliens occupy a quadridimensional plane, rather than a tridimensional one.

They involuntarily generate enormous amounts of electromagnetic radiation and can emit so much energy that they will disrupt machinery and shatter glass structures as they get near them. However, they also have powers that allow them to heal wounds in humans.

In 1963, an engineer named Allan Maxwell received a transmission broadcast by one of these aliens, who was breaking his race's rules by contacting Earth. When asked by Maxwell about God, the alien responded that electromagnetic force permeates everything, claimed that this force could possess intelligence, and equated it with infinity and God. This conversation suggests that the Andromedans' religion is pantheistic.

Later, when a radio station operator increases the station's power - unaware that Maxwell was using it to contact the alien -, the Andromedan ends up being transmitted to Earth like an electromagnetic signal, causing him to materialize on Earth in his physical humanoid form. As he wanders the Earth, the alien inadvertently provokes chaos and even deaths due to the powerful radiation emitted by his body. Maxwell tries to use the radio equipment to send the alien back home, but the military open fire and accidentally shoot Maxwell's wife, Carol. Fortunately, the alien manages to heal her. Realizing that he would be punished if he returned to his people, the alien chooses instead to dissipate his material body and live on as pure energy. Maxwell expresses worry, but the alien merely waves goodbye to Maxwell and his wife saying "end of transmission" and disappears to parts unknown.

Retrieved from "https://aliens.fandom.com/wiki/Andromedan_(The_Galaxy_Being)?oldid=170593"
Community content is available under CC-BY-SA unless otherwise noted.