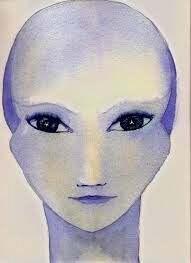 Real
Andromedans are allegedly real sapient extraterrestrial beings inhabiting the constellation Andromeda. This species is said to have visited Florida during 1954.

Andromedan are either humanoid[1] or energy beings.[2] Since it's generally thought that things cannot be made of energy, akin to how they cannot be made of mass, the latter description is implausible. However, by "energy" beings certain witnesses might actually be referring to plasma beings instead.

Most sources and pictures depict them as blue or violet. Similar being's have been depicted in ancient egyptian hieroglyphs.[3]

According to some sources, the Andromedans form part of an interstellar federation, known as the Council of Andromeda.[1][3] Their goals for planet Earth and humanity vary, from removing all hostile extraterrestrial presence[3] to promoting the use of electric cars.[4] However, they always seem to have good intentions and are protective of humankind. Although due to certain findings, their presence on earth can be traced as far back to the days when the ancient Hindu deities and the ancient Egyptian hierarchy ruled; which leaves a lot of uncertainty about their true goals for humanity.

Retrieved from "https://aliens.fandom.com/wiki/Andromedan?oldid=195424"
Community content is available under CC-BY-SA unless otherwise noted.