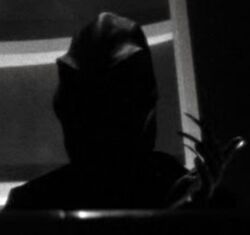 The Outer Limits
The Anderans are a mysterious extra-galactic species of extraordinarily-advanced beings, which are known for destroying entire planets and eradicating other species purely for entertainment.

Little has been observed of this species, as they apparently prefer to conceal themselves in the shadows. They appear to be bald Grey-like humanoids. Their hands are Human-like, with very long curved nails.

This species is native to Andera, an extra-galactic planet located a trillion light-years from Earth. Their society has advanced to the point where they have completely eliminated war and plundering, and thus live peacefully with one another.

However, to provide fun and passionate entertainment to their population, the Anderans have created a deadly gladiatorial game which takes place on an Earth-like jungle-covered planet called Arena.

For every game, the Anderans select two species and abduct two individuals from each: one male and one female. The abductees are placed on the planet Arena, with provisions to last for three days, and are forced to fight to the death during that period. To increase the chances of collaboration on the part of the abductees, the losing team will have their homeworld destroyed by the Anderans.