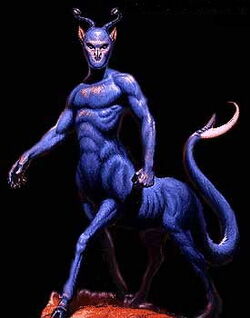 Significantly taller than a Human

Andalites are sapient, centaur-esque creatures. The Andalite's body structure consists of a nearly Human top half and horse-like bottom half, textured by blue fur. In addition to this, their tails resemble those of Earth scorpions, with a sharp, knife-like point.

Andalite culture has developed a relatively benign but irritating form of racial arrogance, that stems from the fact they're the most advanced race visibly active in this part of the galaxy. They have difficulty grasping that other races might be more advanced, even in just one area of development, and often become gruff or condescending when confronted with this. They are very smug when engaging with more 'primitive' races and find it difficult to hide their disdain for, or amusement at, another species' primitive technology and 'backwards' culture.

In an odd reversal, some Andalites consider books to be superior to computers, with the ease and instant access they provide to their contents, without having to search through programs and files on a computer interface.

Andalites have two sets of ribs, one in their upper body and one in their lower body. Andalites have four eyes, two in the "Human" position and two on stalks. The main eyes see, on average, as good as Humans with slightly better color differentiation. The stalk eyes can see far better into the infrared side of the color spectrum and can move independent of the main eyes, and each other. Their hooves absorb nutrients as they run, due to a lack of a mouth - something Andalites find perfectly sensible. Since Andalites have two hearts, they have an incredible amount of stamina, endurance, and speed.

Andalite hands have seven fingers, which allows them great precision and dexterity. However their arms and hands are weak and slow when compared to a Human. An Andalite's tail blade can move supremely fast, faster than the Human eye can see (but not too fast for a cat to see), with experienced tail-fighters able to split the air like the crack of a bullwhip on a strike, indicating that it exceeds the speed of sound at its tip - that is to say, roughly 768 mph (1.236 kph).

Andalites originally evolved as vegetarians that lived in herds. At first they used a form of sign language, but then developed thought-speak, like the Helmacrons. Over time, Andalite culture grew into massive cities. The Andalites found city environments to be too confining and claustrophobic, so they broke up into family groups, and live in simple outdoor dwellings called scoops. Andalite industry is divided among all the scoops with each individual family unit responsible for a certain aspect of its creation. One family might manufacture a certain component, while another works on increasing that component's efficiency. Finished components are often shipped to one of only three large spaceports on their world for assembly into a final product, such as a space craft.

Andalite culture in modern years is fairly isolationist and xenophobic, due to the incident now known as Seerow's Kindness that touched off the Andalite-Yeerk War. Though they are peaceful and at heart kind, they do have a long and very proud warrior tradition that goes back many centuries. To be a Warrior is a way of life for many Andalite males, and is the most prominently accepted path in life for an Andalite male to take. Warriors are expected to be proud and noble of demeanor, chivalrous and selfless as the situation calls for, and unfailingly loyal to their superiors. Though Andalites are ruled by a democratic Council whose members are elected by the people, there is a streak of royalty seen in their military. Commanders are referred to as Princes, and higher ranking general as War-Princes, and they're treated as royalty in everything but blood lineage. Warriors and Arisths (cadets) are expected to always have a Prince above them to serve and to whom they would give their lives, and all military Andalites are expected to observe their cultural and pseudo-religious rituals with solemn dignity.

Females in Andalite culture are expected to become more focused on the intellectual aspects. The female body, being more slender and graceful, and their blade not as large, was not seen as ideal for combat by early Andalite culture, who fought battles with their formidable tails. This cultural sexism has continued into the modern age with most females taking on roles as scientists, crafts people and artists. Common professions include Z-space Engineer (faster-than-light travel and other advanced physics), Grass-scape Designer or Cloud Artist. Their home planet is made beautiful by artforms that use the land and nature itself as the medium, and Andalites have many words in their native telepathic language for all the ways in which earth, water, and sky meet. Many of these words are poorly translated in the minds of aliens to whom they speak. With the invention of Morphing technology, a microbiotic method of shapeshifting, it has been discovered that females tend to be more talented at it than males, with those able to unconsciously control their shapeshifting called Estreens. Estreens often put on performances of artistic beauty by shapeshifting between multiple exotic bodies.

Recent movements in Andalite culture have begun to break down some of the old divides, with a limited number of females serving in the Andalite military (likely as morph-capable spies) and Warriors being expected to study the sciences and arts as well. One major remaining barrier remains strong in Andalite culture, however: There is a powerful stigma against the disabled or crippled, who are referred to as Vecols. These individuals are often ostracized from mainstream society, which sees them as having little to no value. Vecols are certainly never allowed to serve in the Andalite military, even if the medical technology exists to defeat their disability.

Psychologically, as a plains running species by nature, all Andalites have a natural claustrophobia. Although it is not an overwhelming fear, enclosed spaces make an Andalite uneasy, especially if it's prolonged. Andalite spacecraft have long ensured that their corridors and rooms had naturally growing grass beneath their hooves and a simulated holographic sky on the ceiling, perhaps even simulated environment along the walls, to defeat this tendency. The largest ships have entire enclosed parks beneath clear domes, so strong is their need to run free under an open sky.

War against the Yeerks Edit

In recent history, circa 1960 standard Earth calendar, an Andalite expeditionary team landed on a swampy and hostile planet to study a race there that was physically limited, but sapient and highly intelligent. The Yeerks, existing naturally in a state that resembled a slug in murky pools, had good senses of touch and smell and a rudimentary sense of hearing, allowing them to speak in a native language of ultrasonic squeaks. They were a parasitic species however, able to enter the head of, and take control of the brain, of other compatible creatures. This parasitism was the only way that they could leave their pools. The native species on this hostile planet were limited and only a primitive and clumsy creature called a Gedd was compatible, but their senses were pitiful and thus they were not ideal hosts.

The Andalite Prince Seerow felt sorry for such an intelligent race trapped in such a compromising and pitiful existence. In an act of kindness and generosity, he began to share knowledge of the stars and of technology with the Yeerks, who till that point had not even been able to see the stars due to the Gedd's horrible vision. Constructing a device which could emit the uncommon radiation Yeerks feed from, concentrated and absorbed in their pools, he freed them from being limited to one planet.

Yeerks, however, when given knowledge of the universe beyond their small planet, they craved more, and became an aggressive and imperialistic species. Using a few captured Andalite beam weapons (shredders) and a small army of Gedd host bodies armed with clubs and knives, they overwhelmed the small guard forces stationed at the Andalite camp on their homeworld by surprise and stole several of the Andalites' ships. Pausing briefly only to collect a large number of Yeerk slugs from populated pools on the other side of the planet, they then escaped and spread like a plague across the galaxy.

This act of generosity has come to be known as Seerow's Kindness, and is also the name of a law that now legally ratified Andalite xenophobia, and forbade Andalites from sharing technology, sharing knowledge, making friendships, forging bonds or even trusting any non-Andalites. In the years since, it is commonly taught that Andalites can trust none but their own and though they may have 'allies' from time to time, they must stand alone. This attitude of cultural isolationism and xenophobia has only reinforced Andalite arrogance.

Despite this, they remain as a mostly benevolent and philanthropistic race and though they don't share technologies or knowledge, they will defend weaker races from more powerful unjust aggressors, especially if it means atoning for their mistake with the Yeerks by fending off their spread.

Retrieved from "https://aliens.fandom.com/wiki/Andalite?oldid=185056"
Community content is available under CC-BY-SA unless otherwise noted.