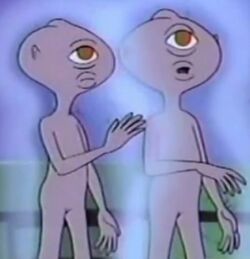 Scooby-Doo
The "Ancient Astronauts" are a mysterious species of purple-skinned humanoid aliens which have been present on Earth for about six thousand years, having built the enigmatic Temple of Sirius in the jungles of South America.

These creatures are humanoids with hairless light-purple skin and seem to have a strong luminescent aura around them. They have five-fingered hands, oblong heads, thick lips and a single red eye with white sclera.

The aliens are a highly advanced civilization compared to Humans, as evidenced by the fact that they have possessed space-faring technology for millennia. Their ships are ovoid in shape and encrusted with large jewels. Despite having spacesuits in their temple, they don't seem to habitually wear clothes.

After getting stranded on Earth, two individuals of this species remained in their lost temple while trying to get their spaceship fixed for the next six thousand years. They only managed to fix it due to Scooby-Doo accidentally breaking a computer and presumably shutting down some faulty system. After that, the aliens expressed their gratitude and took off, leaving Scooby and the rest of the Mystery, Inc. gang with no proof of their discoveries.