"Though space is without boundaries, there are but a few planets where we can live."
―Jack the Ancient 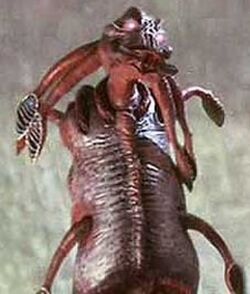 Farscape
"Ancients" is a name applied to a sapient, extradimensional species, known for their advanced mental abilities and for mastering the capacity to create wormholes, which originally linked their native realm to tridimensional space, but can also be used to travel from one point of the galaxy to another.

Having evolved in a different dimensional realm, the Ancients need to undergo biological modifications to be able to manifest themselves in normal space properly.

Their original form is not known, but the form they assume in tridimensional space is that of a short, four-armed creature with leathery skin, spindly limbs and a flattened duck-like snout equipped with insectoid mandibles, cranial tendrils and glowing eyes. Their upper arms are shorter and end in didactyl hands, while their lower arms are longer and end in tridactyl ones.

Individuals of this species are hatched from eggs and refer to their society as a hive. They have the ability to create elaborate illusions, as well as to implant or extract knowledge or memories into or from the minds of others.

They can also disguise themselves by assuming an illusory Human form. Those who haven't undergone the biological process that allows them to survive in normal space can also assume Human form, but will appear with pale skin and black featureless eyes.

In Human form, Ancients don't need to wear equipment such as protective suits or goggles in situations where a regular Human would require them. However, they can still be killed by energy-based weapons.

Ancients are a relatively peaceful race that prefers to seek out coexistence rather than confrontation. However, they can be highly mistrustful of other species, and are not above advocating the death of individuals that they consider a threat to their survival; be it short-term or long-term.

Individuals of this species apparently have long names that are extremely hard to pronounce.

In the past, Ancients were far more numerous and powerful than they are now. At some point, they became a dying race, and were forced to relocate themselves numerous times, until they only had enough energy left to create one more wormhole that would serve as passage for their entire species to colonize a planet in tridimensional space. Since there are only some select planets that can be inhabited by them, they had to choose carefully.

The Ancients considered the Earth as a potential new home, but a simulation created from the memories of Human astronaut John Crichton revealed that they wouldn't be well-received by Humans. At a later point, they managed to find a suitable home for them and relocated themselves, while an individual Ancient nicknamed "Jack" voluntarily remained behind and worked together with Crichton to prevent the wormhole technology from falling into the hands of the Charrids and Scarrans.

Retrieved from "https://aliens.fandom.com/wiki/Ancient_(Farscape)?oldid=168425"
Community content is available under CC-BY-SA unless otherwise noted.